Over 50 years ago a scientist named Ancel Keys did a study that indicated saturated fats to be a major contributing factor in heart disease! Unfortunately he dishonestly rigged the study, but he was so influential that the government adopted his low-fat dietary recommendations on a national level!

Scientists have discovered that Keys cherry picked data to make his study show what he wanted it to show. We now have ample evidence that there is no relationship between saturated fat and heart disease!

Yet official experts including many medical doctors STILL tell us to avoid saturated fats such as butter, eggs, etc. and recommend low-fat diets. Our newer knowledge is up against a lot of inertia, but truth is making progress!

One modern expert on nutrition is Paul Jaminet PhD. He is an astrophysicist who a decade ago knew almost nothing about nutrition. His own health had been gradually declining and his doctors could not help. In desperation he looked into nutrition. He applied his high intellect and studied in depth. In the process of 5 years of study he cured his own health problems and then spent 2 additional years writing his book, Perfect Health Diet. (Our top experts are often those who have personally “been there.”)

Paul wrote: “SaFA and MUFA [saturated and monounsaturated fats] are nontoxic; they are beneficial, for that matter, even when eaten in very large amounts.” (Examples of foods high in SaFA and MUFA are sour cream, cheese, butter, whole fat yogurt, eggs, fatty meats, avocados, coconut oil.)

Furthermore, “The body can accommodate SaFA and MUFA in large quantities because:

SaFA and MUFA are NOT easily oxidized, they are safe. This is an important point because some types of fat can cause excessive oxidation/inflammation, which can lead to common diseases such as heart disease, cancer, etc. These dangerous fats are within the category of polyunsaturated fatty acids (PUFA’s).

Dr. Cate Shanahan MD is a doctor who became ill and finally turned to studying nutrition by which she cured herself (another expert who has learned through personal experience!) She has studied PUFA’s in depth.

In a recent internet video series called “The Real Skinny on Fat,” Dr Shanahan spoke eloquently about the dangers of processed PUFA vegetable oils. The following are a few of her key points:

~ “PUFA’s are very susceptible to reacting with oxygen.”

~ “Vegetable oils are oxidative stress in a bottle.”

~ “Processed PUFA’s are the most significant factor causing oxidative stress in the American diet.”

Frying foods often causes oxidized fat/oil. If you must fry, use high smoke point fats such as coconut oil, olive oil, ghee, or lard. But even if you keep below the smoke point there will likely be some oxidation damage. It’s better to not fry foods at all. Try cutting meat into small cubes and boil it. Works great.

Paul Jaminet makes the following statement at the beginning of his chapter about PUFA’s:

There are two basic types of PUFA’s: omega 3 (alpha linolenic acid of ALA) and omega 6 (linoleic acid or LA).

PUFA’s are biologically prone to oxidation, but both types are needed in small quantities. They occur naturally in whole unprocessed foods. In that content they are generally not toxic, provided the ratio does not get too large on the omega 6 side. The ideal ration is no higher than 4:1 of omega 6 to omega 3.

But due to massive quantities of processed foods the typical American diet contains vastly more omega 6 than 3. The average ratio in the US is about 9:1 (by calories). A ratio of 10:1 and higher has been demonstrated to be a factor in major diseases such as heart disease and cancer. (Jaminet documents this.)

Besides cutting down on omega 6 fats to help the ratio, we need to make sure we are getting proper amounts of omega 3. The beneficial 3’s are most abundant in fish in the form of  DHA and EPA. Consequently fish oil has been the third highest selling nutritional supplement in the US in recent years.

HOWEVER, due to increasing contamination of the oceans (PCG’s, dioxins, mercury) fish oil is now more highly processed and is likely damaged to the point of being harmful. As Jaminet points out, it is better to get your fish oil by eating fish. Forget the gelcaps or bottles. Eat sardines, trout, salmon, herring, mussels, clams, shrimp, or shellfish.

A half-pound to a pound per week of salmon or sardines would satisfy the need for DHA and EPA. Alternatively, krill oil as a supplement is still considered to be okay (but don’t buy the cheapest krill oil!). Be aware that even too much omega 3 can be unhealthy so don’t overdo the fish. (And remember mercury in fish – eat generally the smaller fish.)

We need only a small amount of omega 3 (and omega 6). Vegetable sources offering small amounts of omega 3 fats are broccoli, cauliflower, brussel sprouts, spinach. Whole fat yogurt has a ratio of 2.5:1. Walnuts are often cited as a nut source of omega 3 (although they have much more omega 6).

But vegetable sources probably would not be enough for most people. Organic flax seed oil is an alternative as a supplement. But on one hand, it’s claimed that very little of it is converted into the desired EPA AND DHA…

more than that from one gram of alpha-Linolenic acid (ALA) if it’s converted just half a percent.” (Flax seed oil contains ALA.)

Dr Erasmus says we need the fundamental omega 3 and omega 6 oils of linoleic acid and alpha linolenic acid, and the body can make from those the derivatives it needs such as EPA and DHA.

Jaminet recommends a diet of which 50-60% of calories are from fat, 15% from protein, and the remainder as carbohydrates, and he backs this up with a ton of science! This is not ketogenic, just high fat. This type of diet satisfies hunger for longer periods than high carb eating, and provides relatively even production of energy, less ups and downs. People are unique and have varying needs, but this diet should work well for most people.

So eat all you want of saturated and monosaturated fats – especially COCONUT OIL which is super healthy. It may seem counter-intuitive but a high-carb diet is more likely to make a person fat than a high fat diet.

As an aside: Type 2 diabetes and pre-diabetes are at an epidemic level now in the US. Diets high in carbs, sugar, processed foods, are a primary cause. The hormone insulin is intimately involved in diabetes. Meals high in carbs can cause unhealthy blood sugar and insulin spikes. However, fatty foods have a minor affect on insulin and do not raise blood sugar. Diets high in fat (such as Jaminet’s Perfect Health Diet) can prevent and even cure type 2 diabetes! Diabetes is reversible!

As you can see, dietary fat is a complex topic but I hope this helps. Feedback and questions are welcome. 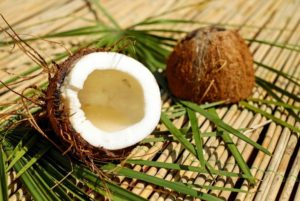